Leominster Museum Trust was delighted to announce in May 2014 that it had been awarded £ 8,900 from the Heritage Lottery Fund (HLF) for an exciting project, 'Rifles & Spades – Leominster in the Great War'.  Over the course of the year to May 2015 the project set out to explore in several different ways what the town was like in 1914, and how the effects of the First World War changed it forever.

Commenting on the award at the time, Deborah Jarman, Leominster Museum’s Voluntary Education and Outreach Officer, said: “We are thrilled to have received the support of the Heritage Lottery Fund for Leominster’s commemoration of the outbreak of the First World War. We want to encourage as many people as possible, young and old, to join in our voyage of discovery. Among others the Leominster Town Cadets are already buzzing with ideas which the grant will allow us to build on.”

Outline of the Project

Leominster and District in the Great War

Children of the Stream and the Field: 6th September 2014

ECHO visit the Our Story Exhibition

Outline of the project

The main elements of the project comprised:

Leominster and District in the Great War 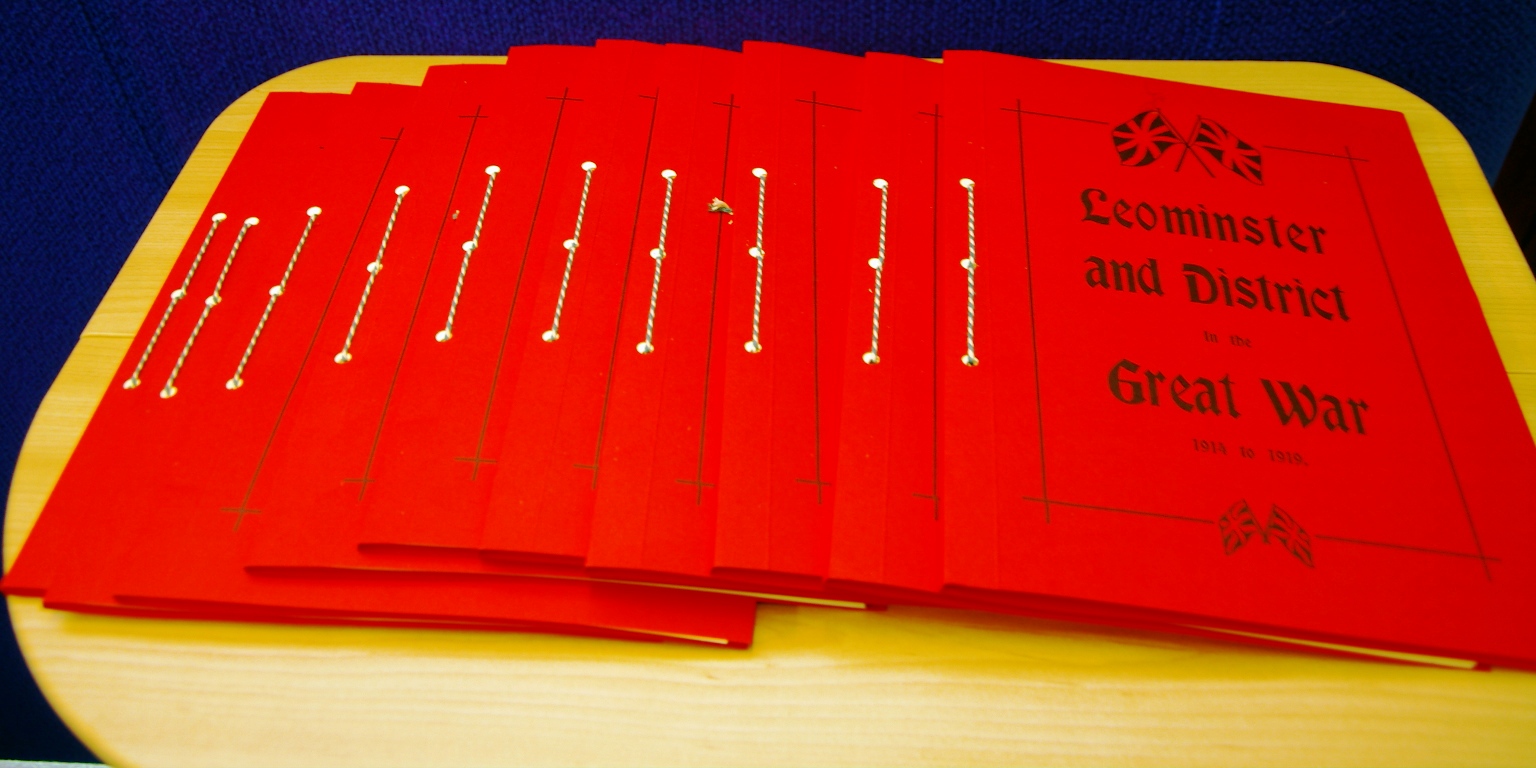 The Museum's First World War collection includes several copies of a commemorative booklet Leominster and District in the Great War, originally published by the Leominster Printing Press in 1919. With funding separate from the Rifles & Spades project as such, this booklet has recently been reprinted by the Museum in conjunction with Leominster History Study Group. Copies are available from the Museum when open, or via our Downloads page, for £5.00 (plus P&P if ordered by post); the price includes a small explanatory booklet which also contains an index of the names of soldiers commemorated in the original.

The first of the three Rifles and Spades Open Days at the Museum took place on Saturday 7th June to coincide with the Leominster Festival. Between 10am and 4pm, 75 people visited the Museum, and looked at our new exhibition. containing both documents and objects about the First World War from the Museum's collection. The Town Cadets worked very hard all day, welcoming visitors with an endless stream of tea, coffee and cake. Many visitors were from the town, but there were many from elsewhere as well. Several were in search of information about family ancestors and were delighted to find out more about 'their' soldiers. The  'Leominster in the Great War' booklet sold like hot cakes at the Open Day!

Over sixty photographs of First World War Leominster soldiers and their families were showing on a rolling slide show. Many of the people in the pictures are unidentified, and we have been hoping very much that at least some of them will be identified by local visitors when they come in to see the exhibition. 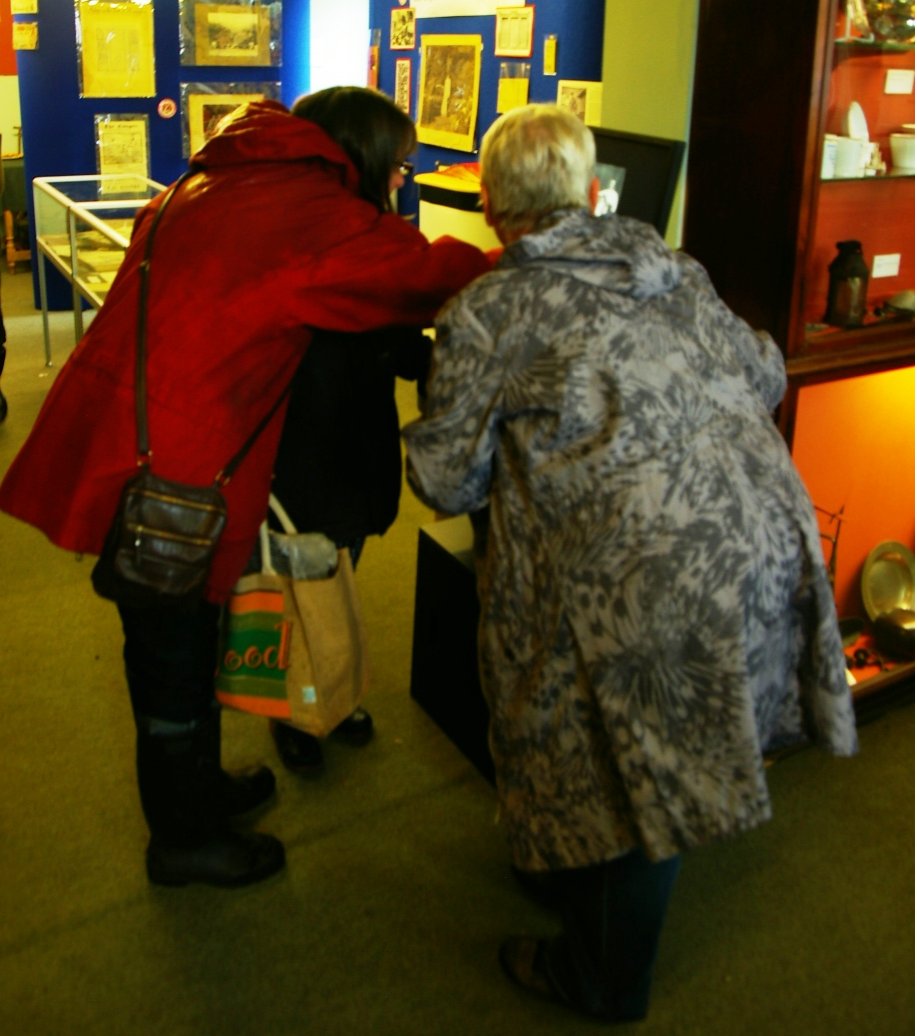 Do you know these soldiers?

Several objects have been loaned to the Museum for the Our Story exhibition, just leaving Leominster Library and about to go on tour. Although all three Open Days have now taken place and the Museum is closed for the winter, it is not too late to let us know about any photos, letters, objects, or just stories to tell about local families' First World War experiences - whether involving soldiers who fought in the war or those who had to cope with the consequences of the war at home. If yours is a local family and you have anything of that sort, please get in touch with the Museum through our Contact page! We'd love to hear from YOU!

The second Open Day took place on the same weekend as 'Children of the Stream and the Field' in the Priory, and the first of the three free talks at Grange Court, and the third open day was held on the day the Museum closed for the winter.  Once again, the Leominster Town Cadets acted as enthusiastic hosts, and there was a welcoming atmosphere around all day. There were 57 visitors during the day. The new curator of the Herefordshire Regimental Museum called in, and gave us a lot of  information about the soldiers on our rolling slide show, just by looking at their uniforms with a knowledgeable eye. Once again, we had a number of offers of  photos, documents and other invaluable material.  There were some welcome comments on our feedback forms: 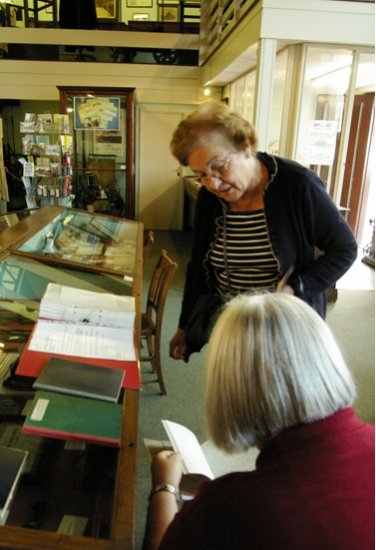 Discussing a memoir at the second Open Day

This event was held in Leominster Priory, at 7.30pm. The title of the event was taken from a poem written by Sir John Stanhope Arkwright, local landowner, and MP for Hereford just before the First World War:

OF THE MEN OF AN INLAND COUNTY
Theirs was no song of the Sea to hasten the veins in their courses,
Theirs was no call of the deep to quicken the pulse of the blood,
They had not sported as children with the manes of the wild white horses,
Or watched the adventurous ships go out on the ocean flood.

Children were they of the stream and the field, of the hill and the forest;
Yet were they one at the call with the rest of their resolute race
Fearless they flung them to battle wherever the need was the sorest.
Yielding to none in the pride of the first and the perilous place.

We will remember them when the sun rises up, and at even,
Long as the winds of the West shall sing through the hills of the Free;
Long as the stream shall flow, and Wye go down to the Severn,
Long as the tide shall roll and Severn sweep to the Sea.

The programme consisted of three parts - Act One of ‘Memories’ by Geoffrey Bright, read by members of Leominster Town Cadets and the Leominster Playhouse group; ‘Back to the Garden’ by The Village Quire; and ‘Hanging on the Old Barbed Wire’ by Leominster Morris.

In the decade after the end of the First World War, many of the soldiers who returned to Leominster found settling back into civilian life a difficult process – as indeed was the case across the country. The harsh economic conditions prevailing in the 1920s made it hard for many veterans to find work, and there was real financial hardship. In response, the Leominster branch of the British Legion decided to raise funds by putting on a play. They first applied for permission to perform the 1928 drama ‘Journey’s End’ by RC Sherriff, but were told that it had not yet been licensed for amateur performance. Instead, they turned to Geoffrey Bright, a local man, published poet, and himself a Great War veteran, and asked him to write a play for them. His response was the play ‘Memories’, which was performed in Leominster, Hereford, and elsewhere to great acclaim in 1930, 1931 and 1932.

In the last eighty years, the play has not been regularly performed in Herefordshire. Although Leominster Museum held a souvenir programme for a performance of the play in Hereford Town Hall in November 1930, it did not have a copy of the script of the play. In 2914 a search was begun and, with the help of Mr Bright’s family, a script was rediscovered,  which enabled the reading of Act One.

Back to the Garden

This was a new musical story of life and hope in the trenches of war-torn France, from the letters of Corporal William Bevan, soldier and gardener. In the Herefordshire County Record Office there is a large collection of papers which belonged to Sir John Stanhope Arkwright (1872-1954), MP for Hereford 1900 – 1912. Included among them is a remarkable bundle of letters written by William Charles Bevan. Research has revealed that he was born in Ivington on the 15th of May 1886. He grew up to become a gardener, and by 1911, he was working for Sir John at Lyonshall. Later, he occupied the position of Head Gardener at Kinsham Court. Once at the front Bevan corresponded with his employer, Sir John. Bevan’s letters to Sir John are a wonderful blend of horticulture and heroism. He comments on blooms and seedlings that Sir John has sent by post for his inspection, talks about the great plans he has for the new garden at Kinsham Court and then, almost in the same breath, tells of patrols in no man’s land: ‘... I was behind one hedge, then a cottage garden, and Fritz behind the other hedge ...’, and of how he is, ‘slightly gassed’! Bevan's dearest wish is to return home to all he holds most dear and get Back to the Garden. Luckily, his wish was granted. Bevan did survive the War, and returned to Kinsham, where he worked for many more years. He finally died in Hereford in 1974.

The Village Quire subsequently developed Back to the Garden into a full-length production for their 2015 season.

Hanging on the Old Barbed Wire

There appears to have been a Morris side in Leominster in the early 20th century that stopped when the local men began to join up to fight in the Great War. It is believed that the only member of the side to survive was the musician, who may have been called Trill. The dance performed tonight was the idea of a member of the Morris, Tim Hawkins, as a tribute to their predecessors of 100 years ago. The dance itself shows the men whistling as they march off to war, building the barricades, fighting in close combat and then falling and fading away leaving just the musician still playing. The first tune used was “Goodbye Dolly Gray”, from a song written during the Boer War, but widely used during the Great War; the second was “Hanging on the Old Barbed Wire”, a private’s lament for his lot in comparison with that of his superiors.

The evening was attended by a packed audience of 240 people. Comments afterwards included:

If you missed the  evening, or want a reminder of the occasion, why not order a DVD of the performances using the order form on our Downloads page?  The cost is only £10.00, plus postage and packing for delivery (or hand-delivery can be arranged within Leominster itself).

The first of the three free talks associated with the project was given by Kate Jarman, formerly of The National Archives and now Deputy Archivist at Barts & The London Hospitals NHS Trust, who provided the audience with a lot of really useful detailed information about what categories of military and other records can be used to trace family ancestors who fought in the First World War or were involved in other activities at home in that period.

The second talk was given by Catherine Beale on November 11th. Its title was 'The Supreme Sacrifice - a hymn in time of war'.  During the First World War ‘O Valiant Hearts’, written and composed by Sir John Arkwright in Herefordshire, became the nation’s favourite hymn of remembrance.  In this illustrated talk, Catherine Beale told the fascinating stories behind the words and the tune.

The third talk, also by Catherine Beale, was given in January on the roles that different members of the Arkwright family played in  the Great War.

On 22nd October 2014, a group from ECHO visited the Rifles and Spades exhibition in the Library, and thoroughly enjoyed looking at all the objects and photographs. The following week, a handling session was organised for them, where they passed round medals and other items and browsed the pages on this website! 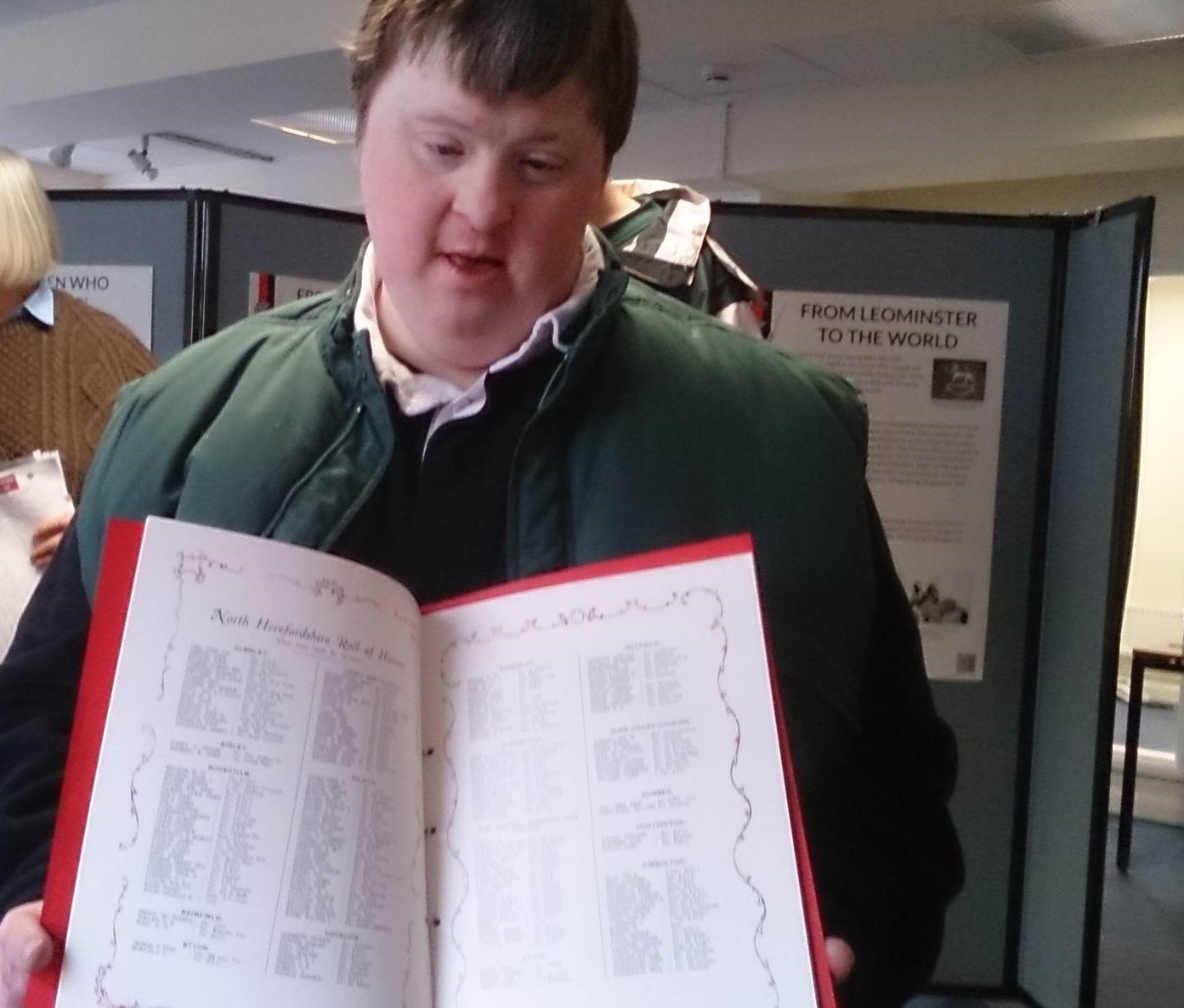 Finding an ancestor on the Roll of Honour

A project outreach visit was made to the Year Five and Six class at Kingsland Primary School. The children looked carefully at a variety of First World War objects from the Museum, deciding what they were, what they were made of, what their function had been, and why they had been carefully saved for 100 years before being given to the Museum for safe keeping. Some of the objects were easier to work out than others; there were some really interesting and sensible suggestions, showing that everyone had thought hard and shared their ideas. 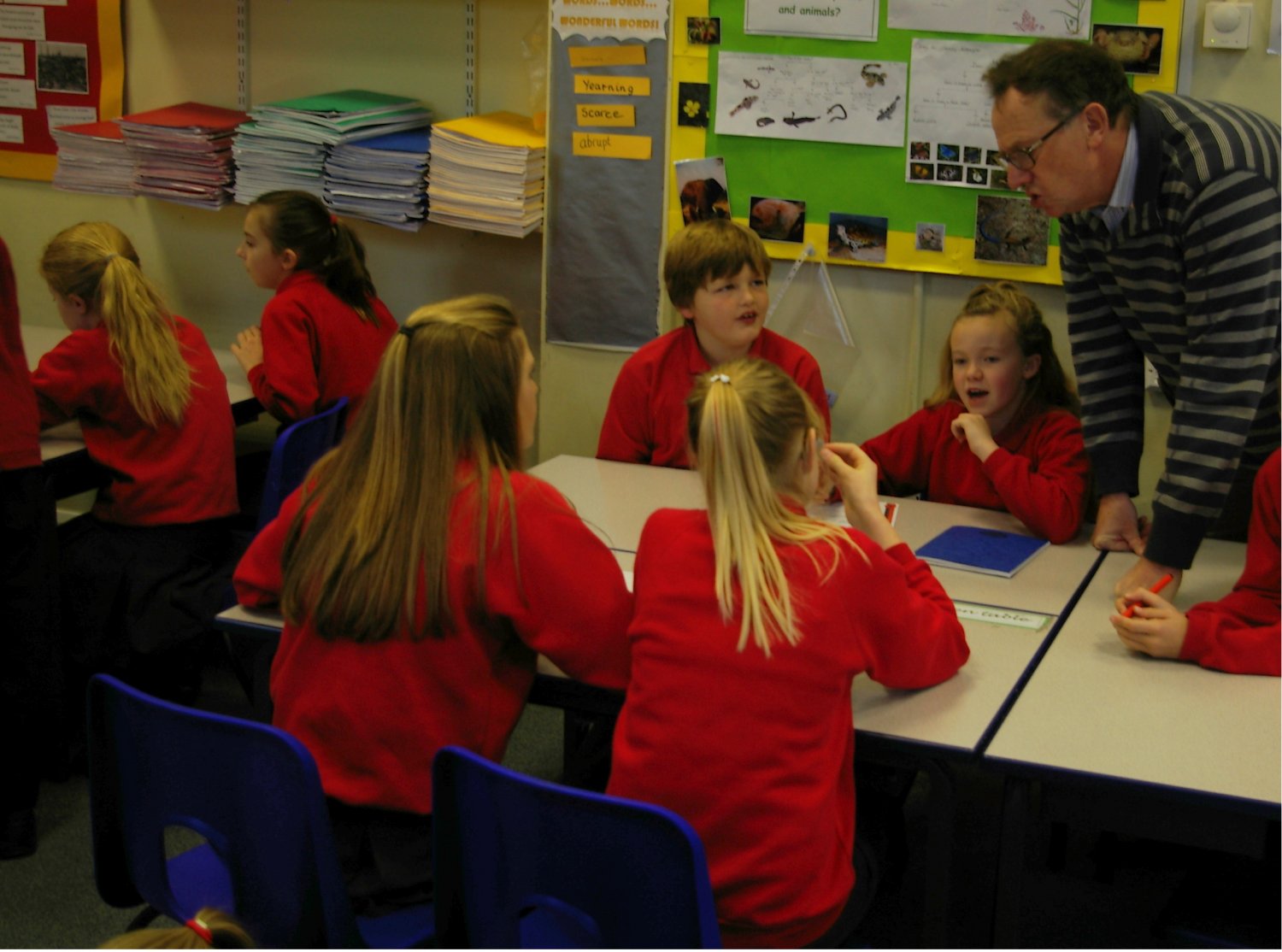 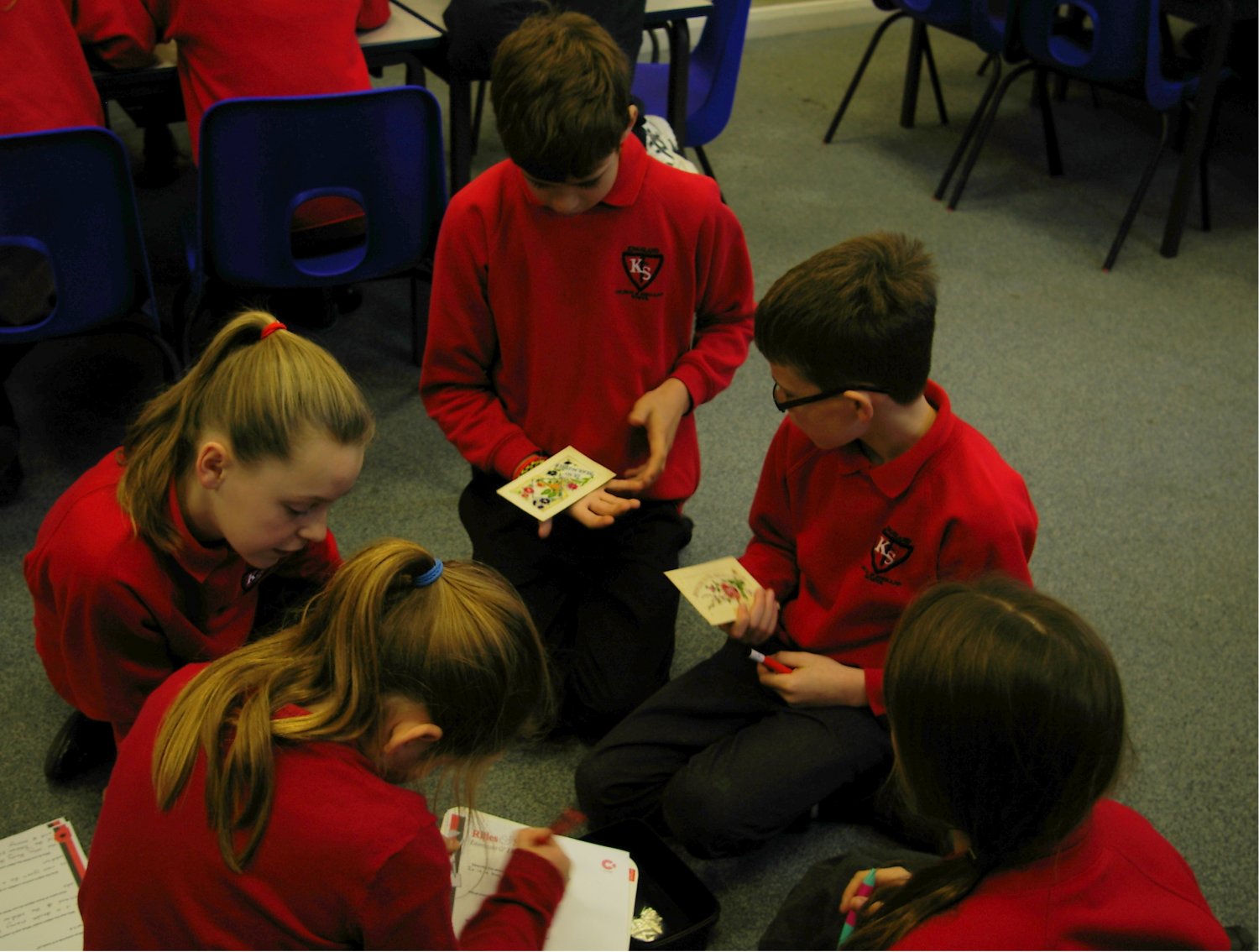 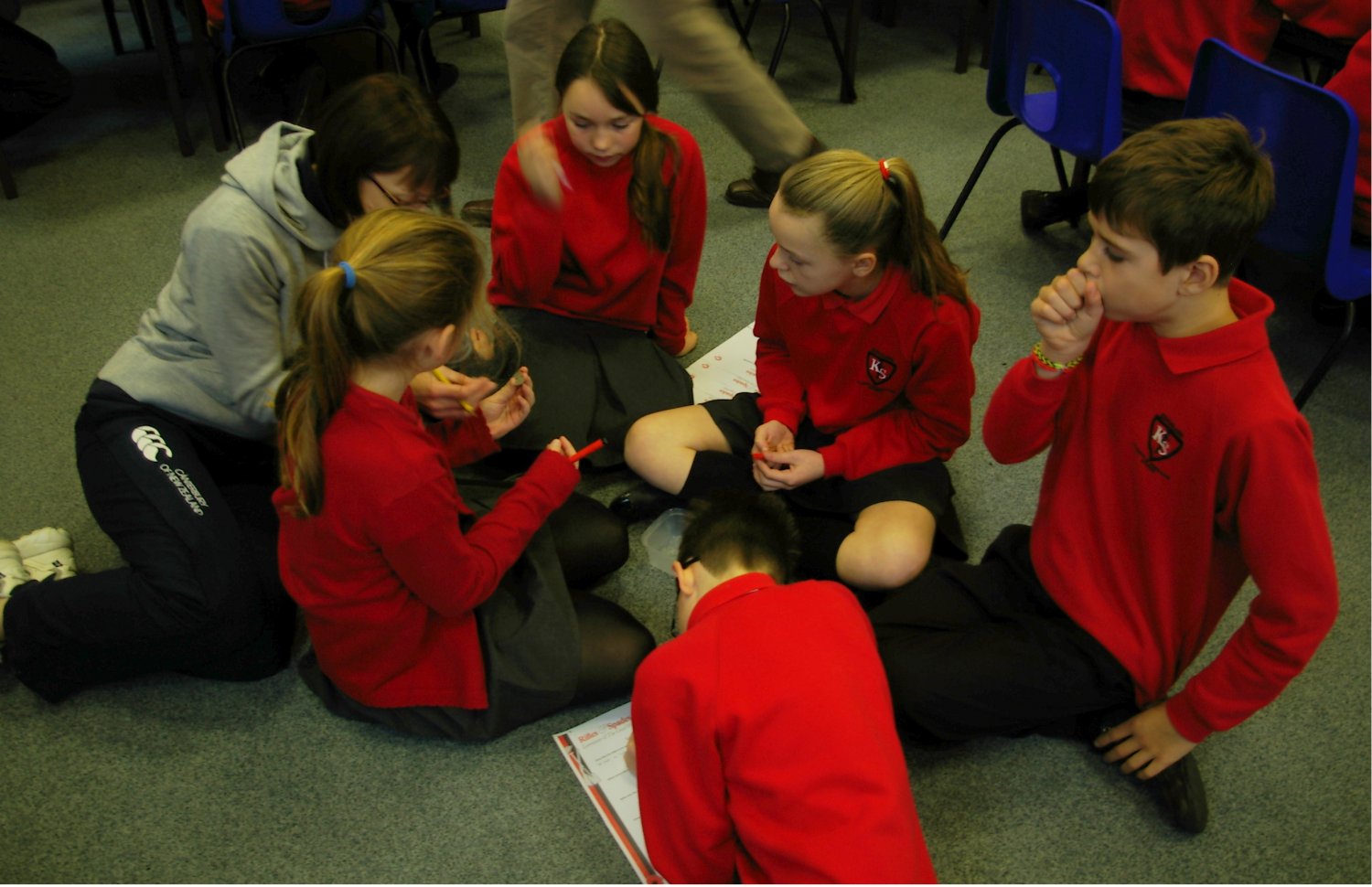 Looking at a brooch made by a soldier 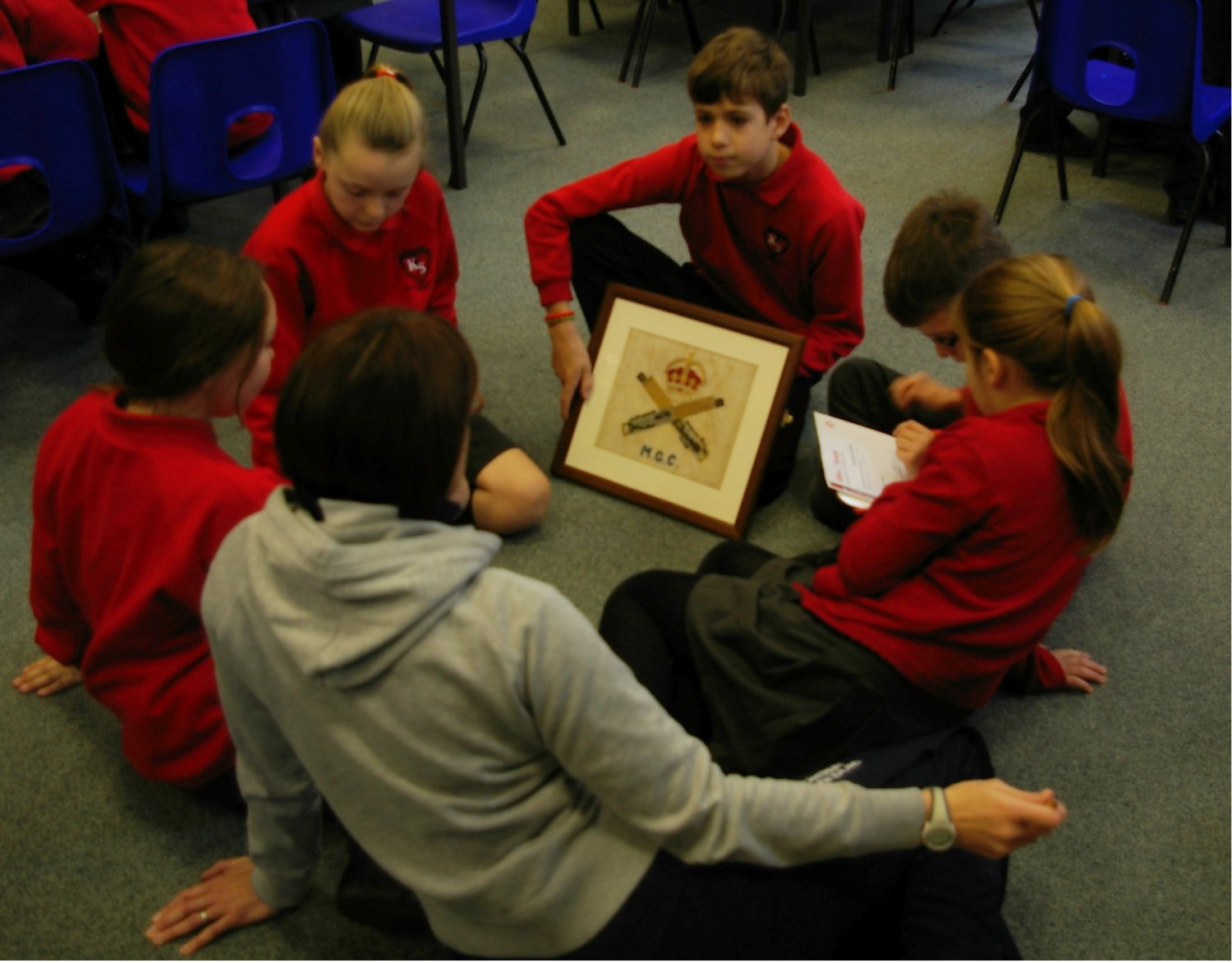 Looking at an embroidery by Private Hodges