'OUR STORY' EXHIBITION: A LAND FIT FOR HEROES? 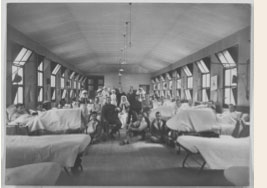 Ward in Hut A No.5 London General Hospital
(St Thomas’) during the War (note the embroidery
hanging above the bed on the right)
(Courtesy of London Metropolitan Archives - Collection
of The Guy's and St Thomas' NHS FoundationTrust)

Twelve days after the Armistice was declared on the 11th of November 1918, the Prime Minister, Lloyd George, promised that his government would “make Britain a fit country for heroes to live in”. Inspiring words, but like many political promises, much harder to turn into reality. Certainly nothing could be the same again.

Peace celebrations continued into 1919, as soldiers slowly returned from the front. William Bevan had returned to Kinsham, and resumed his post as head gardener for Sir John Arkwright once more. A Peace Celebration was held at Kinsham Court on August 23rd that year. 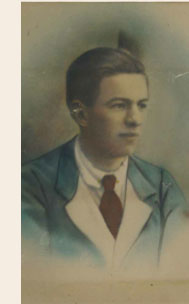 Portrait of Private Alec Hodges in his
hospital ‘blues’, standard issue uniform
for all soldiers in hospital.
(Courtesy of Hazel Hodges)

Among Sir John’s papers in Herefordshire Record Office there is a bundle of notes describing the Peace Celebration at Kinsham on August 23rd 1919.  The day began with a service, followed by a lunch in two sittings with the returned veterans being served first.  They were then each invited into the committee tent to choose a gift expressing local gratitude. William Bevan chose a watch. Afterwards, there were children’s races, tea, a vegetable show, a fancy dress football match, (in which Bevan won second prize with a friend, as ‘Dilly and Dally’), balloons and a firework display. In short, a perfect English summer day – a complete and utter contrast to what so many had been through. 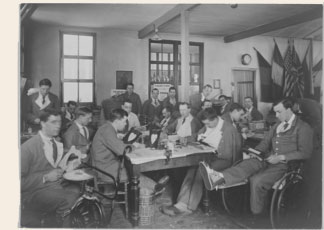 Recreation Room in Hut D No 5 London General Hosptital (St Thomas')
during the War, where Private Hodges may have stitched his embroideries
(Courtesy of London Metropolitan Archives - Collection
of The Guy's and St Thomas' NHS Foundation

Many Leominster men were recovering from grave injuries. Private Alec Hodges, of the Machine Gun Corps, who had joined up at the age of 17, spent two years in No 5 General Hospital, London (the military wing of St Thomas’s) recovering from severe damage to his pelvis and sacrum. Like many other convalescents, he was encouraged to take up embroidery to pass the time, and three of his embroideries survive. The establishment of workshops in many British military hospitals during the war was one of the foundation stones of the development of occupational therapy as a formal discipline in the 20th century.

Private George Davis fought with the Herefordshires in Egypt, where he received a severe facial injury, losing part of his jaw.  He spent some time in hospital in Egypt, before being returned to England to finish his recovery at Oswestry.  Because his injury was not disabling, George was trained as a medical assistant as his wound healed.  (He was, according to his son, very good at bandaging their childish injuries for the rest of his life!).  His album contains a number of interesting photos of hospital interiors and patients. 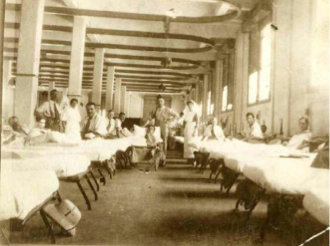 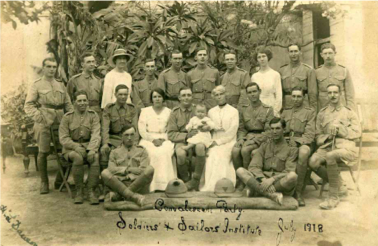 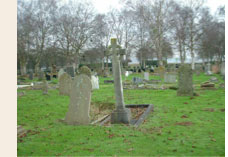 Although they were not killed during the War years, injury shortened the lives of many soldiers, who died before their time. The Commonwealth War Grave Commission lists ten men in Leominster Cemetery as war casualties, the last dying in 1921, aged 21. 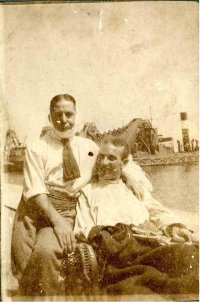 George Davis (left) with a friend
(Courtesy of Arthur Davis)

Although they were not killed during the War years, injury shortened the lives of some soldiers, who died before their time. The Commonwealth War Grave Commission lists ten men in LeominsterCemetery as war casualties, the last dying in 1921, aged 21.  Some are recorded as dying in hospital, others at home in the town.

Some of the men who were lucky enough to return to Leominster managed to make the transition back to normal life relatively well, although those who remember them said they rarely talked about their War experiences.  However, in Leominster, as in towns across the country, there were others for whom the Twenties proved a very difficult decade.  Their injuries, whether physical or psychological, combined with the prevailing economic conditions, made it hard for them to support themselves and their families.

By 1930, the British Legion in Leominster wanted to organise a fundraising event to help veterans in financial hardship.  They decided to stage a play, and asked Geoffrey Bright, a local man, War veteran and published poet, to write one for them.  His play, ‘Memories’, was put on in Leominster and Hereford, and judged a great success.